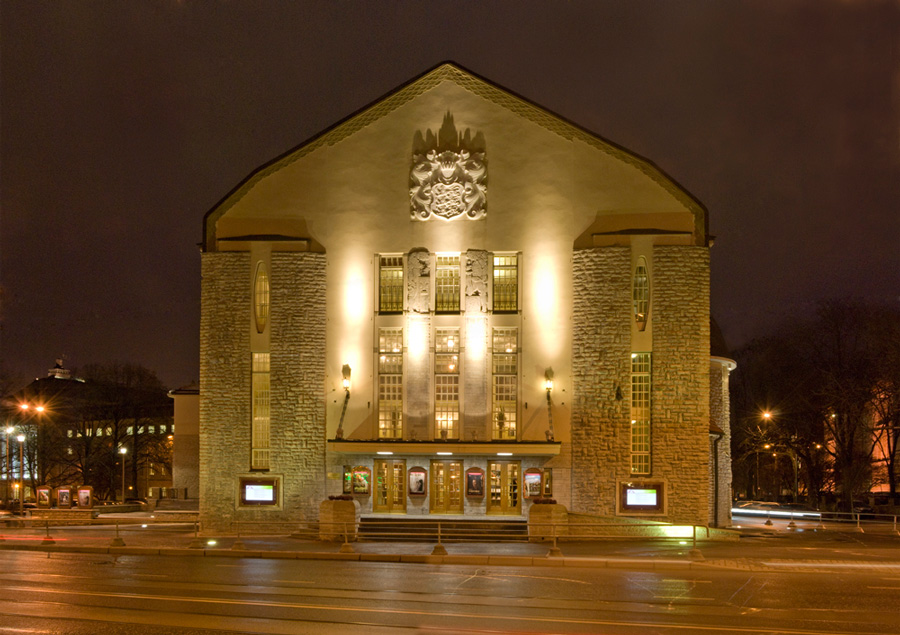 Estonian Drama Theatre
The theatre is the oldest preserved theatre building in Estonia. It was erected as German Theatre to a design of Alexei Bubyr and Nikolai Vassiliev from St. Petersburg in 1910. What attracts the attention is not only the beautiful Art Nouveau style, but also the building material – local limestone. The general construction of the building has not been changed since it was erected, though in the 1950s the emblem of Tallinn on the façade and few details in the theatre were covered. In the 1980s and after 2000 the theatre was renovated. The location, next to the entrance of the medieval city centre and the close neighbourhood of the Estonian National Opera, creates an inspiring ensemble.

Visits: by appointment, at least one week before the planned visit, in groups of up to 10 people 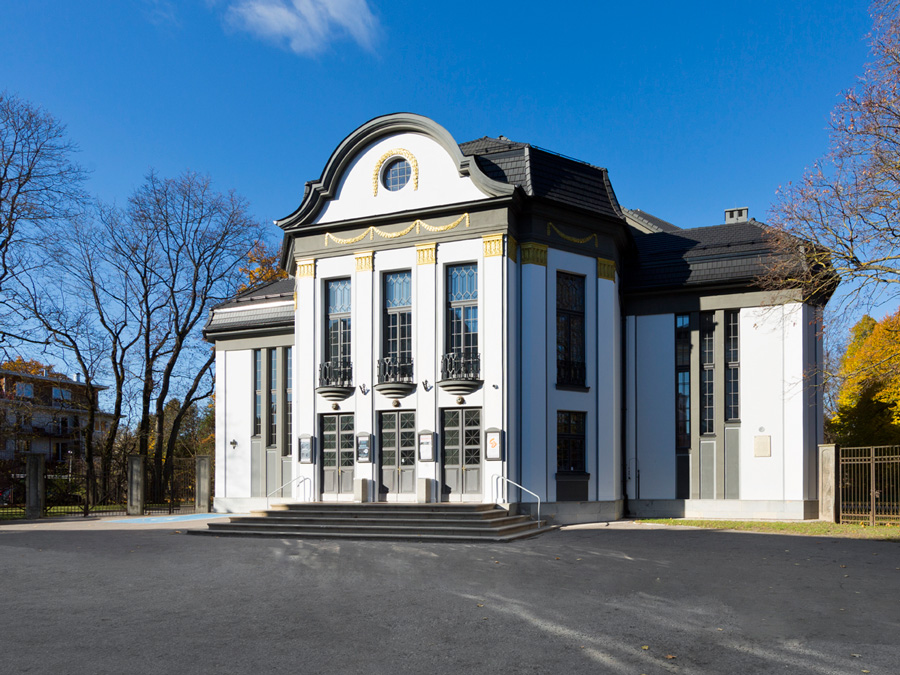 VanemuineTheatre, Little Building
As an institution, the Vanemuine Theatre in Tartu is the oldest Estonian theatre: it was established in 1870. The Little Building, hosting the theatre today, was erected from 1914 to 1918 at the commission of the German Craft Association. The theatre was designed by Arved Eichhorn at a time when Art Nouveau was popular. In Germany this style was influenced by Neobiedermeier and Heimatkunst.

Characteristic elements of these styles can be found both on the façade and in the interior of the theatre. The building was renovated between 2013 and 2014. Today, the main façade in the Art Nouveau style presents itself most beautifully against the background of trees in the nearby park. 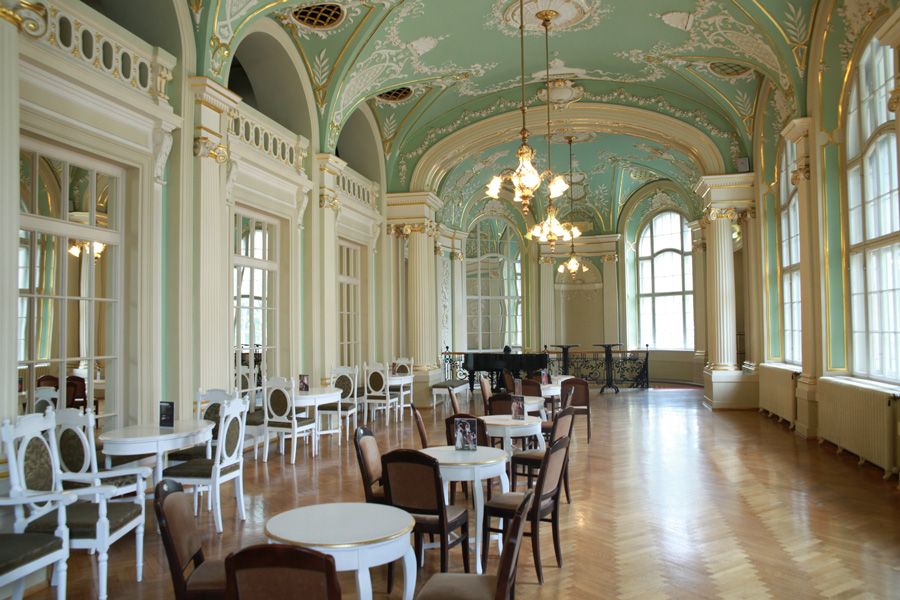 Latvian National Theatre
In 1897 the Riga authorities decided to build another Russian city theatre and commissioned architect August Reinberg to design it on a historic site, close to the Swedish fortifications from the 17th century. The theatre, opened in 1902, played a major role in the history of the Latvian state, as its independence was proclaimed here in 1918. The theatre was designed in the beginning of the Art Nouveau period: the careful observer can spot some characteristic stylistic elements on the façade. The Large Room is impressive and the White Room is decorated with ornaments in classical ionic style, columns and plant motifs. The lamps are decorated in Rococo style. In brief: the theatre is a fine example of eclecticism. 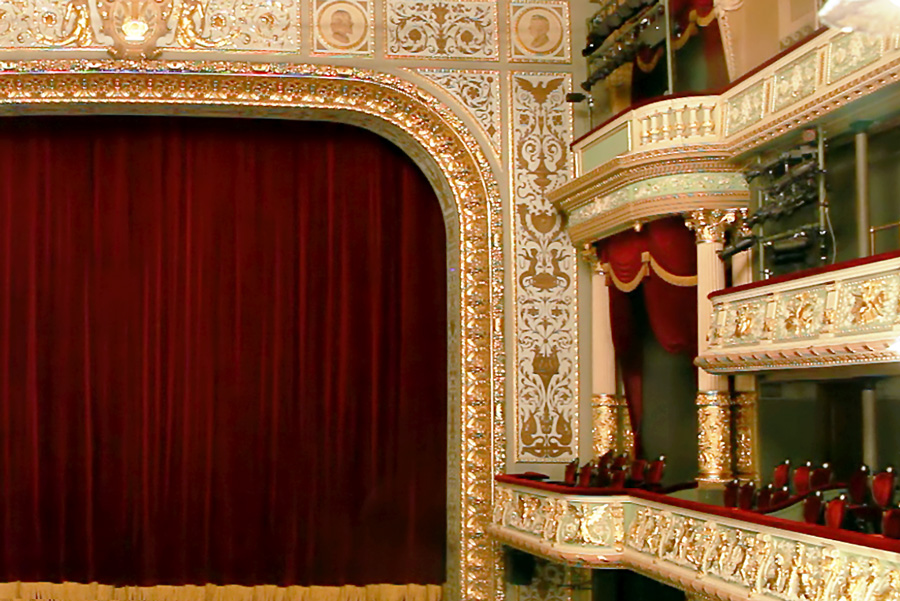 Latvian National Opera
When the centre of Riga was rebuilt in 1856, one of the most significant locations was chosen to build a new theatre: near the canal, on the site of the former city fortifications. In 1860, a design in the Greek classical style by Ludwig Bohnstedt was selected, and the theatre opened in 1863. Its façade is decorated with an ionic portico and a group of allegoric figures. As the composer Richard Wagner worked in Riga from 1837 to 1839, a bas-relief depicting his figure is located above the stage and it is illuminated during performances of his operas. Today, the building is the headquarters of both the Latvian National Opera and the Latvian National Ballet. Each summer, the Riga Opera Festival becomes the climax of the season. 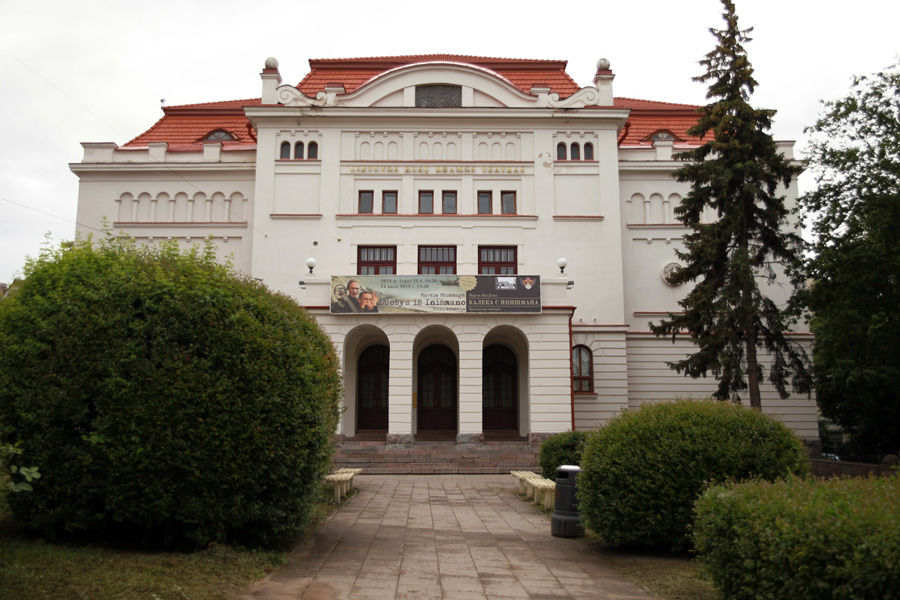 Lithuanian Russian Dramatic Theatre
The theatre, built in 1913 by Wacław Michniewicz and Aleksander Parczewski, is situated in the old town, which is a UNESCO world heritage site. The building combines elements of Romanesque, Renaissance, Baroque and other styles. In the Large Room, there is a chandelier as old as the theatre itself, decorated with masks and crystals. The theatre hosted numerous important theatrical and historic events. In 1917 during a conference which took place here, the establishment of an

independent Lithuanian state was propounded. The theatre also witnessed the triumphs of Juliusz Osterwa and his Reduta Theatre, as well as Aleksander Zelwerowicz, Borisas Dauguvietis, Antanas Škėma and Eimuntas Nekrošius. Since 1986 it is the headquarters of the Lithuanian Russian Dramatic Theatre. 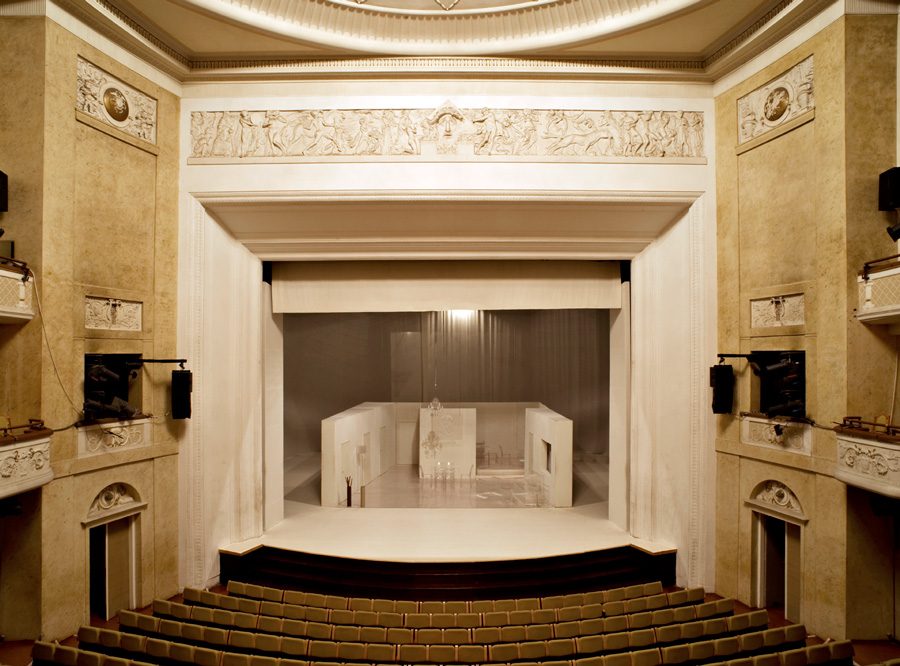 Arnold Szyfman Polski Theatre
The Polski Theatre in Warsaw, designed by Czesław Przybylski, was opened in 1913. The representative building with its elegant foyer and cloakrooms, an auditorium for 1000 spectators, a modern revolving stage with a mechanical fly system and a cyclorama, was erected and equipped within only nine months. It is one of the few buildings in Warsaw not destroyed during the Second World War. As a result, it is the only theatre from the beginning of the 20th century in the capital preserved in its original beautiful shape. Sculpture decorations, including five medallions depicting characters of Polish plays, are the work of Zygmunt Otto. The public rooms, the backstage area and the orchestra pit are all open to visitors. 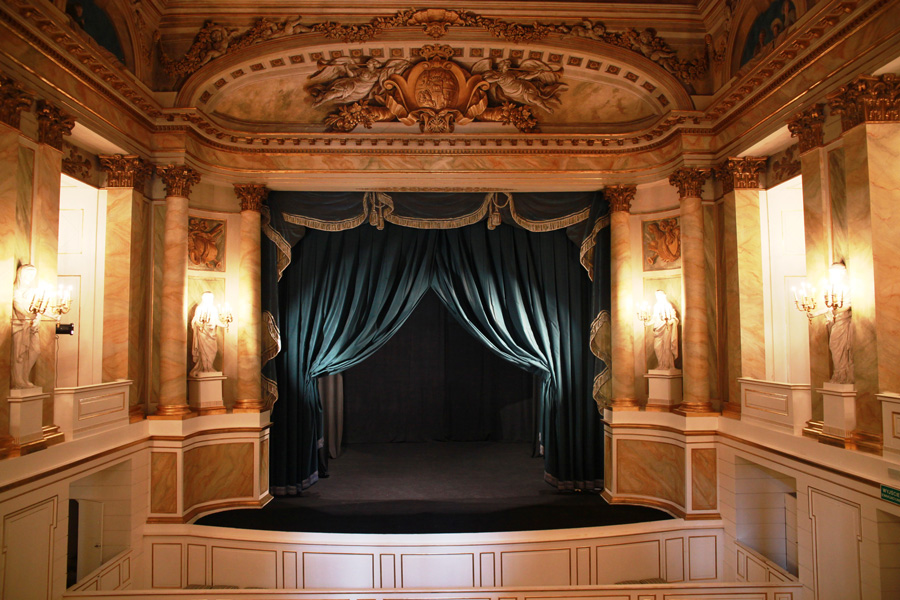 Royal Theatre in the Old Orangery
Located in the Old Orangery in Łazienki Park, this is an authentic 18th century court theatre, the only one still preserved in Poland. It was erected from 1784 to 1788 on the order of King Stanisław August Poniatowski by the Italian architect Domenico Merlini. The impressive illusionistic painted ceiling shows Stanisław August as Apollo on a quadriga, painted by Jan Bogumił Plersch, the king’s court painter. In the corners are images of the best playwrights according to the king’s opinion: Sophocles, Shakespeare, Molière and Racine. The theatre is still used for performances, concerts and classes. In another part of the Old Orangery the royal collection of sculptures is presented. The lovely park also features an 18th century open-air theatre.

Visits: by appointment during the Royal Łazienki Museum opening hours 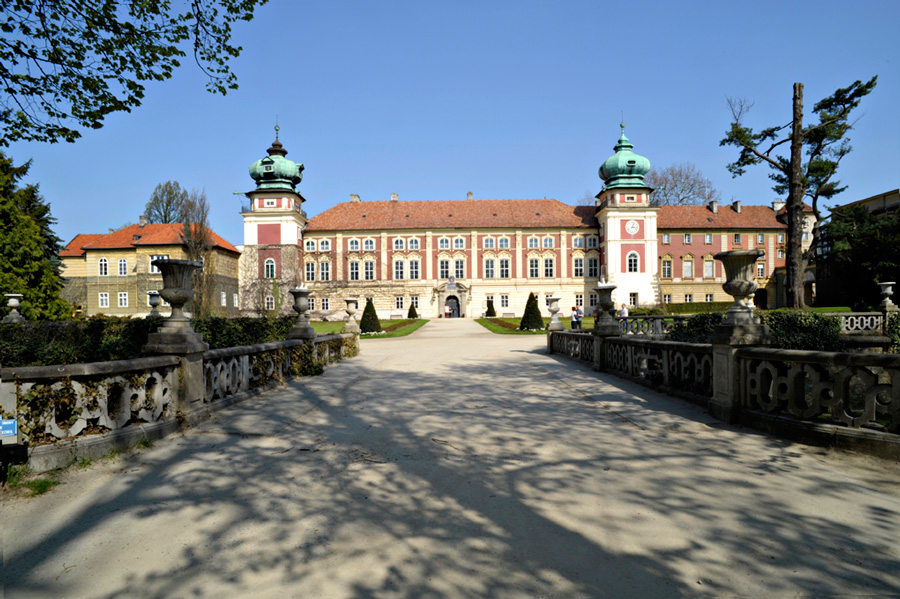 Theatre in the Castle Museum
The theatre in Łańcut is the only palace theatre in Poland preserved to this day. It was designed by Józef Henny and built in 1792 for Princess Izabella Lubomirska. The theatre was redesigned in the neoclassical style by Christian Piotr Aigner from 1800 to 1802. The auditorium has a cupola supported by eight Corinthian columns. At the order of Count Roman Potocki it was restored by the famous Viennese architects Fellner & Helmer in 1910. From this period the theater has kept the original design and technical equipment. From 1994 to 1995 the museum carried out a complete restoration of the theatre as part of the programme Support to conserve the European Architectural Heritage 1994. 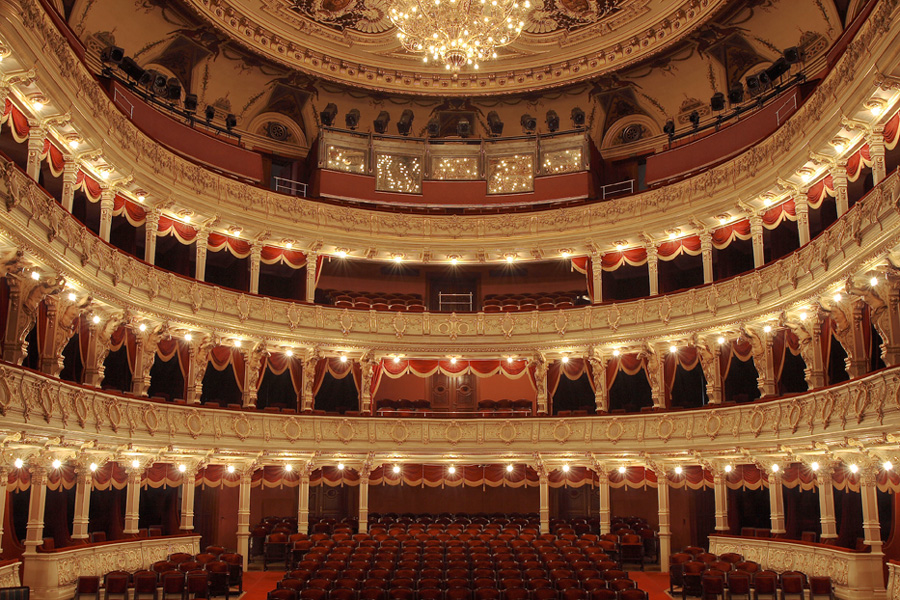 Juliusz Słowacki Theatre
Operating uninterrupted since 1893, it is one of Poland’s most famous theatres. Since 1909, it is named after the great Polish poet, Juliusz Słowacki. The building, erected by Jan Zawiejski, is regarded as one of the most precious monuments of the eclectic theatre architecture in Europe. On the façade, next to the inscription Kraków for the National Art, are sculptures symbolising Comedy, Drama, Poetry and Music. The interior is richly decorated with frescoes by the Viennese artist Antoni Tuch; and the famous painted curtain is by Henryk Siemiradzki. Next to the stage the beautiful historic dressing room of the famous actor Ludwik Solski can be visited. 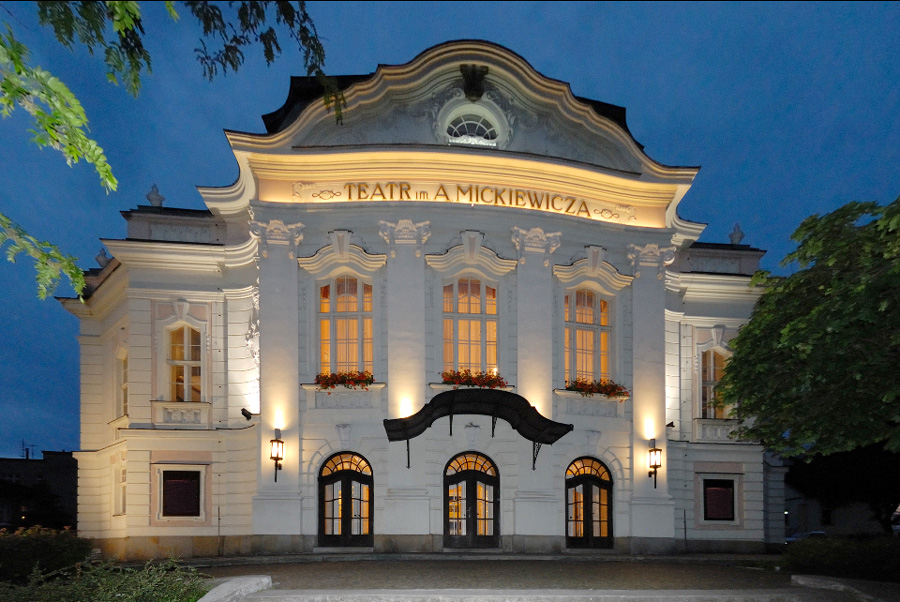 Adam Mickiewicz Theatre
The famous Viennese architects Fellner & Helmer designed the theatre in the style of modernised late Viennese Baroque in 1910; this is why it perfectly fits the urban design of the city. It has a seven-axis façade, covered by a tall mansard roof. The nicely decorated foyer has repeatedly attracted filmmakers: ‘The Promised Land’ by Andrzej Wajda and the television series about Helena Modrzejewska by Jan Łomnicki were shot here. The theatre organises performances of theatre, music and dance groups, as well as cabarets. The Theatre Festival Without Borders, the ‘Cinema on the Border’ Week Long Film Screeings as well as Theatre Master Workshops, are held on a regular basis. 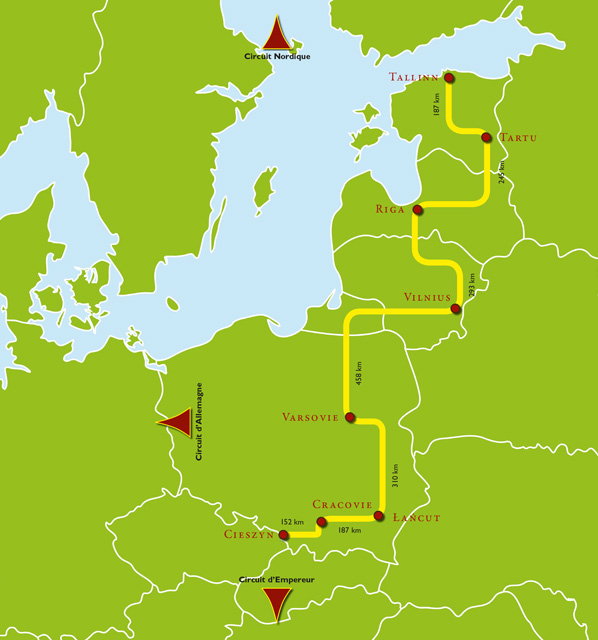